European hornet in a jar 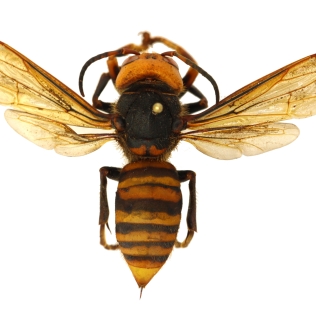 B. An Asian giant hornet

C. European hornets are big too

The European hornet is also a relatively big insect ranging from 0.5-1.5 inches (1 inch = 2.54 cm). If you just caught one or found one dead the easiest way to conclude that it is not an Asian giant hornet is to check their very bright abdomen (insects have three main body parts, head, thorax, abdomen). The abdomen of an European hornet has black “intrusions” into the yellow bands . You can see that pattern clearly in pictures A, C and D above (hover your cursor over the pictures to see the captions). In contrast, the markings on the abdomen of an Asian giant hornet are clean circles (B above). Asian giant hornets also have bright yellow heads and a black thorax (where the wings attach) while European hornets have a reddish/burgundy thorax and back of the head.

Of note, the European hornet, is an invasive species in the US – brought in by European settlers in the mid 1800s. It is now widespread across the eastern US as far west as Louisiana and the Dakotas but never made it to the Pacific coast states.

Unlike the Asian giant hornet that makes nests on the ground, the European hornet makes nests in trees (usually in tree holes) or under the eaves of houses. European hornets sting and can do so repeatedly. Be very careful. A look from afar should be enough to ID them (remember the coloring).

Click here for information on how European hornet can damage trees.

Photo credits – all photos except for the photo of a pinned specimen of an Asian giant hornet (courtesy of the Washington State Department of Agriculture) were submitted by NJ residents. 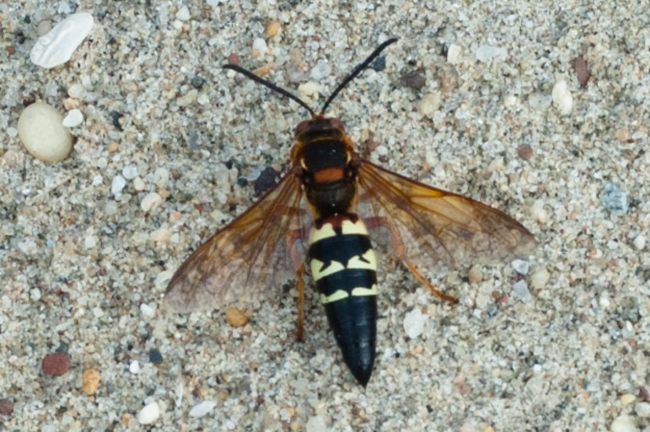 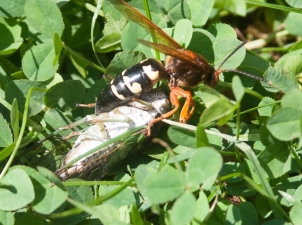 B. dragging a paralyzed cicada

Cicada killers are large and can be relatively common during the summer. Their markings are very distinct from those of an Asian giant hornet (much darker with black “comma” intrusions into the light yellow circles in the abdomen, as you can see in the pictures above). Cicada killers are deadly to cicadas and other insects but ultimately harmless to us – the males do not have stingers and the females, which have an ovipositor/stinger they use to paralyze the cicadas and deposit their eggs inside them, are singularly focused. They are not aggressive and do not have the nest-guarding instinct of honey bees and hornets. Unless you go out of your way to interact with them they will ignore you. Click here for more information on cicada killers.

Nest in the trees. Notice the side entrance.

Bald-faced hornets (or many other common names reflecting its coloring) are native to north America and are actually wasps.  They make elaborate standalone nests in trees but can also use the sides of buildings and can be common in urban areas. They are relatively large wasps (the queens can be > 1 inch and the workers usually range around 3/4 inch) but are easily distinguished from Asian giant hornets by their B&W coloring. Another common name is “bull wasp”, which reflects its aggressiveness and pest status. Importantly, they can spray an irritant from the stinger to the eyes of nest intruders. Nest removal should be performed by professionals with appropriate equipment. 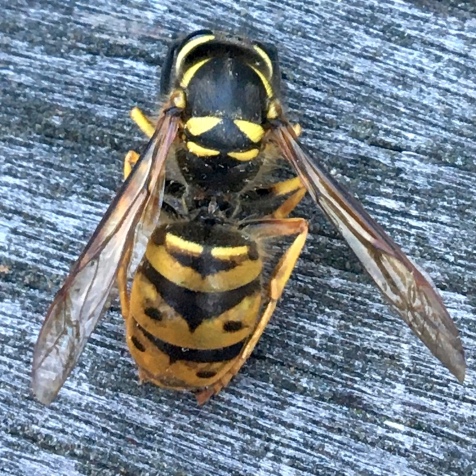 B. Yellowjacket from the top

While yellowjackets (or yellow jackets)  are significantly smaller than the hornets we are concerned about, the queens can reach 3/4 inch and they are active in late spring (now) so they may be confused with Asian giant hornets. Yellowjackets make their nests primarily underground but they can be in busy recreational areas, even under buildings and will make nests aboveground if needed (although usually still associated with houses or other human structures). Importantly, yellowjackets can be aggressive if they think the nests are threatened.

There are several species of yellowjackets, some native and some invasive. We think the picture above is of an invasive Vespula germanica based on the fact that the black dots on the abdomen are always separate from the black rings. Otherwise, it might be Vespula maculifrons, a US native. By the way, the name “maculifrons” refers to the markings on the face – see picture on the left above – the dark markings on the labrum (between the eyes above the mandibles) can be absent or can be quite variable ( a triangle, a line) but don’t usually have two dots, which is why we think it is V. germanica.

In any case the black dots on the yellow in the abdomen (picture on the right above) indicate these are not Asian giant hornets.

4. As the season progresses we will add more lookalikes. We welcome pictures. Meanwhile, click here for other species that have been confused with Asian giant hornets.

BONUS: if you can (are willing to) take a good look at the “face” of the insect you caught 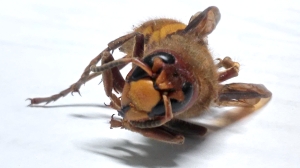 check to see if the base of the eyes and the strong mandibles “touch”. They do in the European hornet (A on the left) but do not in the Asian giant hornet (B and C).

The distance is created by the side plate (technical term is gena). The gena is wide in the Asian giant hornet and narrow in the European hornet.

Another easy feature is the upper lip (labrum) that is only slightly wavy in the European hornet (A) but has a deep indentation in the Asian giant hornet (C).

For more information and some excellent pictures, take a look at the Washington State department of Agriculture website. They also have a site that summarizes all recent putative detections. If you click on the dots you will see what is being confused with an Asian giant hornet. Do not make those mistakes. Most large insects eat other species that otherwise may become pests.