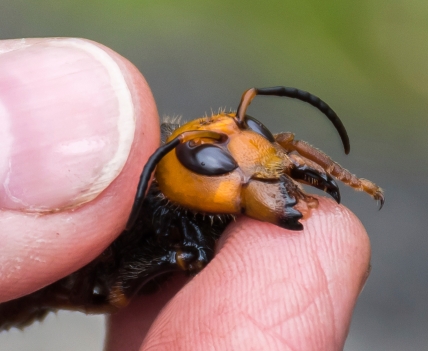 May 20, 2020 – These are not new news but old news: Asian giant hornets (AGH), including a nest later destroyed, were detected in western Canada (British Columbia) last summer (2019). Later, in December, a dead AGH specimen and some suspicious evidence of large numbers of dead (decapitated) honeybees were detected in a couple of locations in Washington State. For details developed to provide information to the public that is starting to think any large insects is an AGH click here.

Contacted in late April, Sven-Erik Spichiger from the Washington State Department of Agriculture confirmed that no detections of the species have been made so far in 2020. Click here for a mapped tally of putative detections. The photo above was provided by Sven-Erik for the information sheet developed by Michelle Infante-Casella and William Bamka. Thanks!

← An “erratic” mosquito moves north and the results are predictable
The Asian giant hornet has been re-detected in 2020, two queens →